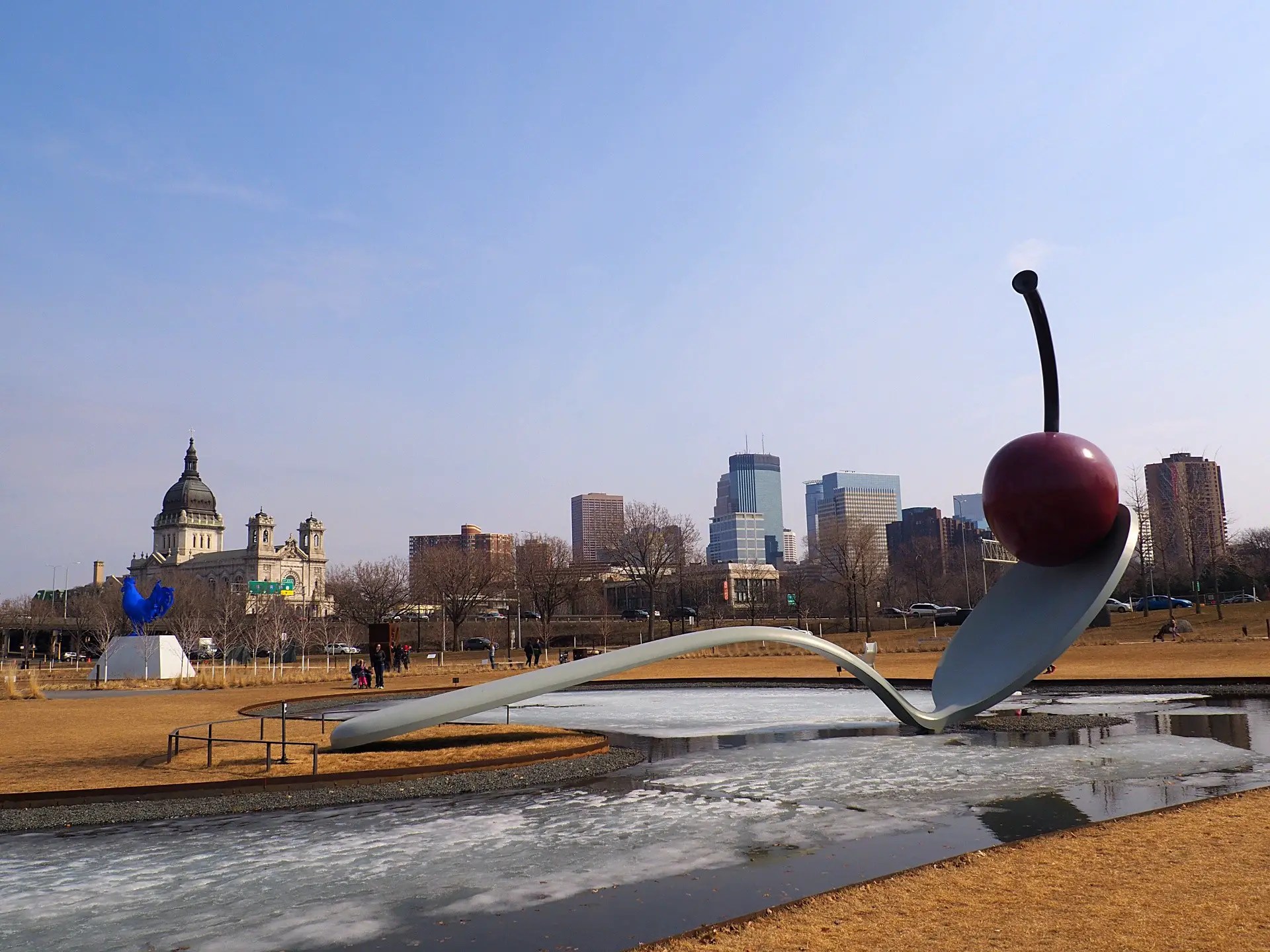 If I had written this article about my visit to Minneapolis earlier and not two years after it happened, I would have bragged about how human, modern, progressive Minnesota’s largest city is. Sadly, the city was put on the media scene for other reasons with the death of George Floyd in May 2020.

I’m still going to tell you what I thought about it and what I did in Minneapolis, so before the Black Lives Matter movement, which I have no doubt must have had a huge influence on the city.

This trip to Minneapolis happened in March 2019.

Where is Minneapolis located?

Minneapolis is in the North of the United States of America. The city is often neglected in favour of its more famous neighbour, Chicago.

Living in Manitoba, it is the largest city accessible by car (Winnipeg – Minneapolis = seven hours drive) and that explains why the majority of my American explorations are based in the state of Minnesota!

Things to see in Minneapolis

The Minneapolis Sculpture Garden looks iconic, this photo pops out all the time in city views:

The Garden has 57 sculptures and is free. Each artwork has a clear sign citing the artist and his intention, which I really liked. There are various styles classic, contemporary, mirrors, it’s weirdly awesome. You can see them all on the Walkert Art Center website .

In the heart of the garden, there is a museum. I had a simple and good lunch there, but I didn’t visit the galleries (I’m not a fan of contemporary art at all!). However, I have fond memories of the place because it was the day I decided to stop putting sugar in my daily coffees – the coffee I had at the museum was the first of this positive new habit.

Street art is EVERYWHERE in Minneapolis. I had done my research before going on the must-see pieces and arranged my walks to find them.

30 minutes away from the city center by public transit, you’ll find waterfalls and a quite respectable size park: Minnehaha Falls. I was content to just go see the falls, but there are also historic houses, trails, statues, the park goes all the way to the Mississippi!

Look at this wall of ice behind the falls! I saw winter photos on Instagram where everything is frozen and people can go under the waterfall in the ice, it was super impressive.

I really enjoyed just walking around Minneapolis, observing the reflections on the buildings in the city center, looking for older bricks, going to cafes, each better looking than the other.

Things to visit in Minneapolis

I couldn’t wait to visit the Mill City Museum, or the Flour Museum. Its sign is emblematic: Minneapolis was a city of grain and the museum is located in the ruins of the great mill in the world.

But I was rather disappointed: the museum is small and there were school groups everywhere. Some brands of box-ready boxes had sponsored parts of the museum, so I kinda felt like I was stepping into an advertisement.

The various attractions inside the museum (a great movie about the history of the city or the possibility of going up to the very top of the tower) improved my impressions a bit, but it’s not the best museum in the city for me, I preferred the Minnesota History Center which I will talk about below!

Right next to the Mills City Museum is the Guthrie Theater. I entered and climbed to the very top floor, because there is a panoramic terrace. Mirrors have been placed all over the place too, making for some great abstract photos of the Gold Metal Flour sign.

The University of Minnesota campus

Having grown up with American TV shows, university campuses still make me dream, even today after having had my own experience when I worked as a teaching assistant in a Canadian University.

So I strolled around the University of Minnesota campus trying to imagine what it’s like to be a student in such a setting, far from the horrible-looking buildings of my own college career.

The campus also houses a completely futuristic building, the Weisman Art Museum. I did not visit it, but the store had pretty things, including postcards!

The abbreviation MSP, Minneapolis-Saint-Paul or the expression Twin Cities  is often used, as the two cities are twinned and connected by tram. Saint-Paul is not just a suburb or a dormitory town, it is the capital of the state of Minnesota. It is therefore home to several attractions.

I love to visit political buildings, it’s my strange pleasure on vacation. I love to learn more about the political, social, historical functioning of the place where I am.

The guided tour of the Capitol is free and takes a tour of the political organization of the state. It also allows you to climb into the rotunda to have a great view of the golden statue.

I wasn’t sure if visiting a second museum was a good idea after the disappointment of the Mill City Museum. But no, I absolutely loved the Minnesota History Center. It is the archetype of the playful and entertaining museums, with different levels of exhibits for children and adults.

There is a part on the history of Minnesota of course but also on the technical prowess, a simulation of the tornado of 1965 where the room moves on itself, a gallery on immigration, another on agriculture, in short, everything I like!

How many days to visit Minneapolis? I stayed there for five full days, but two and a half days were devoted to some work training. One more day would have allowed me to go to other neighborhoods or visit one or two other museums.

Will I be going visit Minneapolis again? I hope !